Explore ancient monasteries dating back more than 1000 years and little-known meditation centers; discover the preserve remains of a monk and gather with lamas of Spiti. This is a journey through the mystical inner-space of Spiti.

Looking at all the ancient Buddhist monasteries and temples around the world, in diverse and unique ways the traditional Tibetan Buddhist culture has been well preserved and flourished in the Spiti Valley for generations.

Airport welcome and check in at the hotel in the center of Delhi. Night in hotel.

Early morning departure for New Delhi train station. 2nd AC train to Chandigarh. Your driver will be waiting for you at your arrival at the station. Transfer to Nalagarh Fort, located right at the base of Shivalik Hills. Check-in to and night in the Fort.

Drive to Banjar. Check in to and night in Raju Guest House.

Transfer to Manali and Kaza by road with a slight detour to stop and admire Lake Chandara Tal (4250m). Night in hotel.

Day to visit the areas near Kaza and acclimatize to the height. Visit the monasteries of Kye and Kibber, one of the highest villages in the world, at 4 300 m altitude. Follow-up of the visit of the villages of Gette and Tashigang. If time permits, there is the possibility of returning to Kye on foot. Return to Kaza. Night at the hotel.

After breakfast, visit the Ecosphere Institute for an introduction to the valley, people and culture of Spiti. Transfer to Langza, a village located in a large meadow. Visit Lang Temple. Arrival to our hosts for lunch. In the afternoon, visit “Fossil Center”, an initiative created by the youth of the village in order to preserve the rich geological patrimony of the region. Night in a local's house.

Now, it's time to trek. Cross a plateau until we reach Komik. It is possible to follow different routes according to the physical condition of the participants. It should be noted that the steepest paths usually offer the best views. Visit Komik monastery, one of the highest in Asia. Meet your hosts. Night in a local's house.

We spend the day riding yaks. Leaving early in the morning toward two small hills where the view of the surrounding areas is breathtaking. The path winds through floral pastures. After that, it’s the descent to reach Demul, a small town. Visit the town. Night in a local's house.

Today's trek is mainly downhill. The winding path in the valley goes along the Lingti River. Arrive in Lhalung where you will find the oldest temple in the region as well as thousand-year-old tree! Lhalung is known for both its arak (local alcohol) as well as its folklore. Cultural performance in the evening. Night in a local's house.

A progressive climb until we arrive at Dhankar Lake (3890 m). Picnic on the lakeshore. Steep descent to reach the town bearing the same name which was the former capital of Spiti in 17th century. There you see the Dhankar monastery that is an absolute work of art founded in the 11th century by Rinchen Zangpo and that is now inhabited by 40 Geluppa Monks; from the same sect as Alchi monastery in Ladakh. Night in the guest house of the monastery.

TREK Direction Giu, located just at the Tibetan border and near some isolated Spiti villages. Giu houses a priceless relic: a 600-year-old mummy of a monk! Continue on to Tabo and its thousand-year-old monastery that has been recognized by the Indian Archaeological Survey. Return to Kaza in jeep. Night in guest house.

A long day of road in perspective! Once again cross the valley of Spiti until Kunzum La (4800m), last reference to Spiti. Descent in the Lahoul region to the Leh - Manali road, filled with more and more alpine passages. After that, a last climb up to Rohtang La (3900 m) before arriving at the descent that leads into the Kush Valley with all its lushness and splendor. Night in guest house in Manali.

Free day to explore Manali. At the end of the day, depart in a “deluxe” bus toward Delhi as the final destination.

Pick up from the « bus station » and transfer to the hotel. Visit Delhi where the splendor of the Mughal Empire starkly contrasts with the modernity of the new town. Shop in Chandni Chowk, the street with many silver sellers located at the heart of Old Delhi. In the afternoon, we will reserve one or two rooms in a hotel so you can leave your belongings or take a shower before your evening transfer to the airport. End of our services.

Price including tax per person in 3-star hotels

Visit to Amberfort on an elephant or in a Jeep to the Amber fort. Indian visa fees (60 €).

This price does not include:

The 2 main meals: lunch and dinner.

Photo and video permits on the sites.
Personal expenses, tips, drinks…
The insurance. 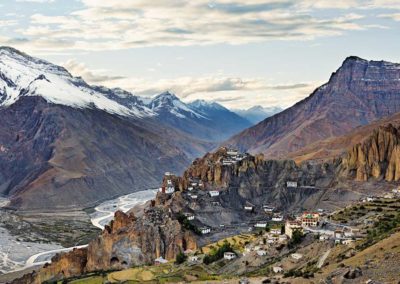 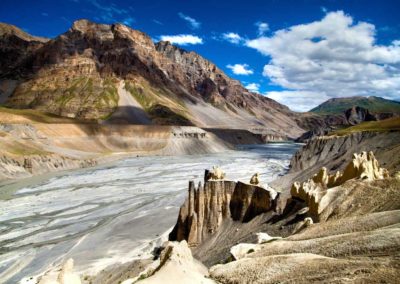 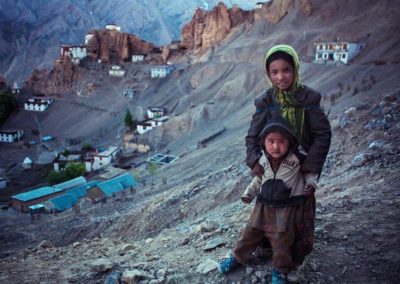 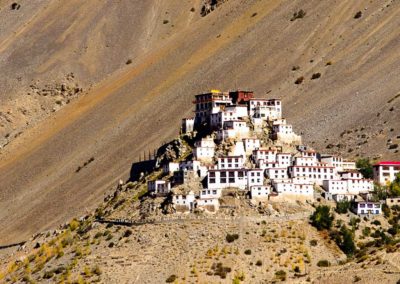 Separated from fertile Lahaul by the soaring 4551m Kunzum Pass, the trans-Himalayan region of Spiti is another chunk of Tibet marooned within India, a kind of 'mini-Ladakh' with fewer tourists. The scattered villages in this serrated moonscape arrive like mirages while the turquoise-grey ribbon of the Spiti River is your near-constant companion, albeit sometimes way below in precipitous gorges.

With mountain adventures beckoning from all directions, Manali is a year-round magnet. Backpackers are well catered for in parts of Vashisht and Old Manai where numerous agents offer trekking, climbing, rafting and skiing according to season. Meanwhile, so many Indian families and honeymooners come for a first taste of snow that greater Manali now has an estimated 800 to 1000 hotels and guesthouses. Tight-packed resort buildings already fill the town centre and are now steadily devouring former orchard terraces as far south as once-rustic Prini 'village'. But while the whole area gets jam-packed in season (mid-April to mid-July, mid-September to mid-October, and over Christmas–New Year), it doesn't take too much effort to get off the main tourist trail. And in November, clear skies plus slashed prices make Manali a bargain – if you can handle the cold and the closure of some restaurants.

Offering beautiful reflections of the mountainscape plus chorten, this small lake sits high above Dhankar, accessed on foot by a steep 2km path that starts across the road from the New Monastery.

Near the top of Lhalung village, this outwardly modest monastery is actually an antique gem. Beneath a yellow painted tin roof, the very atmospheric Serkhang Gompa (main chapel) has interior walls lavished on three sides with an extraordinary array of colourful mud-plaster sculptures. They're so old that locals claim they were made by God not man.

Key Gompa is a Tibetan Buddhist monastery located on a picturesque hilltop at an altitude of 4,166 m above sea level, close to the Spiti River, in the Spiti Valley of Himachal Pradesh, India. The monastery has the distinction of being the oldest and the biggest in the Lahaul and Spiti district of Himachal Pradesh and a religious training centre for lamas. Key Monastery is home to around 300 lamas who receive their religious education here.

“I absolutely loved the Spiti trip! I had wonderful experiences meeting new people, exploring quaint villages and discovering the wonders of this beautiful country. I really enjoyed the homestays and eating local Spiti food. I also liked the fact that it was a small group, if it had been much larger we would have had a harder time moving about.“

“Our guide Tsering was fantastic as were our pilots/ drivers. And I left India with many new friends and wonderful memories. I am also inspired by the work Ecosphere does and would like to volunteer with them at some point.“ Ladakh is an fascinating and entrancing region of India. A literally breathtaking high altitude landscape, the religion and culture here is decidedly Tibetan, with incredible Buddhist monasteries everywhere and a vibrant history of forts and palaces.

Nanda Devi in the highest peak in the Himalayan Indian Garhwal. The centerpiece of the Garhwal region. It is undoubtedly the lesser-known Nanda Devi sanctuary less frequented by hikers