Assam is the ideal destination for those who love horses and horse riding as it brings back the nostalgia of the life the British planters led. Ride along the banks of the Brahmaputra as the river comes alive. Enjoy an exhilarating canter along the sandy shores or just walk gently through the villages of the river people. The extensive trails in the tea gardens will also make an attractive ride. See the tea pluckers at work, plucking fresh green tips destined for the estate factory.

Your base during the ride is a beautifully renovated former tea manager’s Heritage Chang bungalow set in the midst of the tea gardens. From your veranda and over morning tea, you will hear the jingle of bicycle bells and the chatter of the tea workers as they walk or cycle to work.

Each day the rides explore the surrounding tea gardens and Brahmaputra flood plain. Throughout the area you will see farmers working their fields in a way unchanged for centuries. 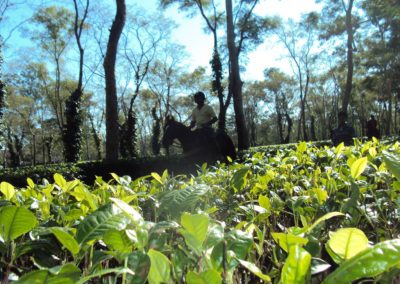 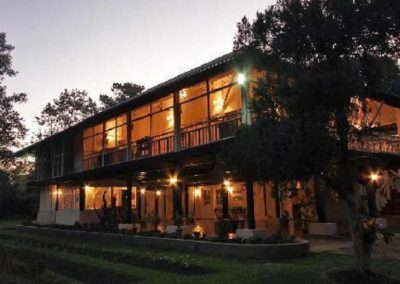 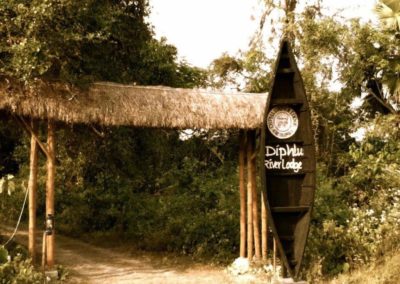 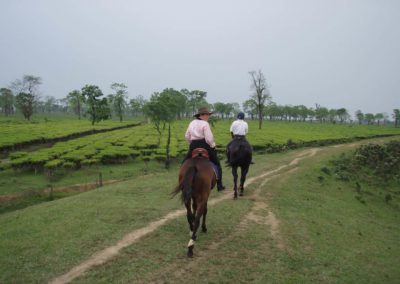 You should be a competent and confident rider on a forward going horse. Riding through the tea gardens is at a walk; however, there are opportunities for trot and canter when you explore the countryside.  Please note that if there has been recent rain this can make tracks too slippery for much cantering.

The riding time varies between two and four hours per day and averages three hours. There are a number of trail rides exploring the surrounding area of the Brahmaputra and the tea gardens.

On some days you ride through the tea gardens where there is the opportunity to learn about the history and production of tea. Other rides head out through the farms and villages that spread out from the banks of the river. It is sometimes possible to ride out to islands which appear in the dry season. These are sandy and provide perfect going for some faster riding.

The enormous tea plantations of Assam that look like a green carpet are renowned across the world for their beauty as well as the premium quality tea produced by them. Every year, Guwahati welcomes numerous tourists that come to experience the process of manufacturing tea, right from the planation until the leaves are packaged.

With the stunning ancient bungalows amidst lush tea gardens “tea tourism” is another exciting part of Assam tour. The lavish tea bungalows constructed during Britcher’s era are still intaking its traditional way in most tea gardens.

Though the British left India in 1947 they left their embrace in all the tea bungalows. Most of them are sizeable two-storied bungalows with a vast loan amidst tea garden with a scenic view. Staying a few days these places will take you back to a planter’s life in the 18th century.

The horses are extremely good in traffic - not that there is any of them once you are in the plantations themselves.

“Unique and unforgettable, would love to go back. | A second horse was arranged after the first did not suit me, and after that I really enjoyed the riding. It was very clear that the horses were cared for to the highest standard and we saw the stables where they live when they are not out on rides. They are used for other equestrian activities, such as show jumping there.”

Holiday of a lifetime!

“Holiday of a Lifetime | Super horses, well cared for and well led. Good variety of riding experience from ambling walks to exciting canters. Appropriate rest periods and refreshments along the way.Great tack and stabling.“

Northeast is about its people so the best way to discover this region is to stay with its inhabitants. Off the tourist trail, North East India is home to some of the most endangered wildlife in the world. Arriving into Assam, drive to Manas National Park on the fringes of the Bhutan border, which plays host to over 450 species of bird as well as secretive big cats including tigers, clouded leopards and panthers. Nagaland is steeped in history and tribal tradition. Wander through tribal villages and soak up the atmosphere at the Hornbill Festival, where Naga culture is brought to life in colourful song and dance.