Horse riding trails in Rajasthan are full of colour and splendour. Ride magnificent Marwari horses with their beautiful curved ears across open farmland and desert, passing through local villages and greeting families and their children. Stay in extravagant camps or converted forts and palaces and immerse yourself in the culture of your hosts. Visit camel and horse fairs thronging with life and activity. A horse riding holiday in India is a feast for your senses.

You will cross varied undulating terrain on athletic, forward horses as you travel through rural Rajasthan on your way to or from the fair. 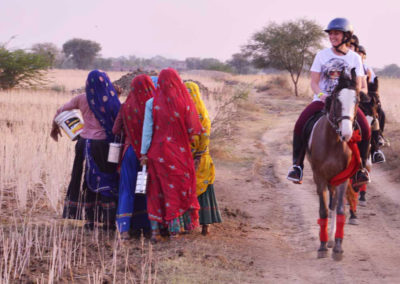 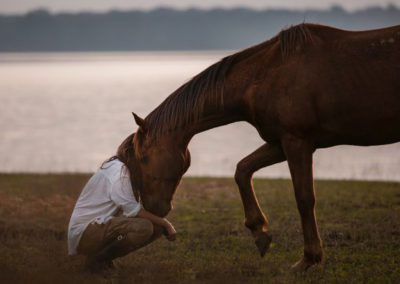 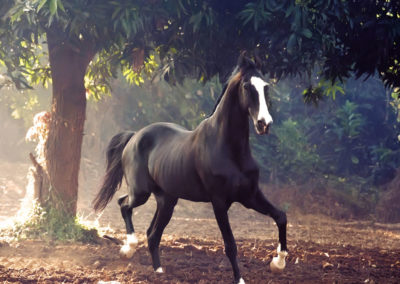 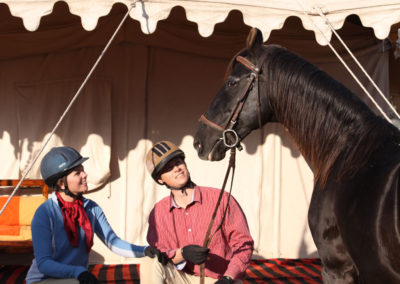 The stable has organized safari trips for more than twenty years on Marwari horses – all aged between 4 and 10 years old that are very well trained and very well taken care off. MARWARI HORSES are distinguished by slim hips, crescent ears, long hair, tall and energetic, and amazingly soft to touch. They are beautiful to look at, and a dream to ride. Bred only in India as war horses, their stamina and willingness to go is evident from the start.

On the Pushkar to Danta safari the entire ride will pass through the beautiful landscapes, past remote lakes, rivers and small tribal villages. Most tracks will be totally off the main roads. The distance covered will be around 25-35 kilometers per day: 3-3.5 hours before lunch, 2-2.5 hours after lunch.

“The world is a country which nobody ever yet knew by description; one must travel through it one’s self to be acquainted with it.” Lord Chesterfield

During the entire horseback tour you will be exposed to local customs, festivals, ceremonies, music, rituals and even different eating manners. Travel broadens the mind.

“I finally rode Marwaris, wow what amazing Horses these are! especially if you like a challenging steed and are a fit rider ! Very technical ride at times considering that most of the riding landscape is on country sandy roads confined by barbed wires and often surrounded by trees which means that at speed you really need to control your horse and the distance from the horse ahead of you to avoid kickings! ”

Superbly organized trip by the outfitter.

“Superbly organized trip by the outfitter. We had two lively mares that were easy to control. Very pleasant riding experience. Both required skilled riders mindful of their idiosyncratic behavior (my mare was scared of camels…)” A principal attraction of Rajasthan is the majestic forts and palaces built by the Rajputs over the centuries. Many of these spectacular buildings have been restored and converted into hotels, reviving the glorious lifestyle of the rulers who built them. A feeling of majesty overtakes you when you see historic palaces or view unencumbered wildlife in its natural habitat. Delve into the vibrant culture and heritage of India on this fun-packed family adventure. From a camel ride in Rajasthan to a tiger safari at Ranthambore National Park, India offers memorable experiences that will last a lifetime.